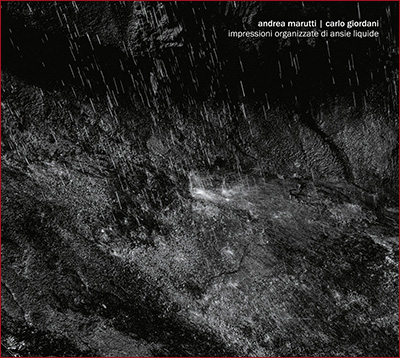 Recorded and assembled between December 2013 and January 2020.

The pieces offered here consist of ‘Part II’ and ‘Part III’ of a larger body of work originally commissioned by Ambiente H to provide a soundtrack to “Aquology – Oceano interiore”, a multimedia project by Massimo Indellicati’.

‘Part I’ was released in february 2020 by Taâlem and is available both as a 3″ disc or digital download at taalem.com

All pictures by Stefano Gentile.

Graphics and layout by Andrea Marutti.

Thanks to Giuseppe Verticchio, Jean-Marc Boucher and Stefano Gentile.

The origins of the album date to 2011, when Andrea Marutti was asked by the filmmaker and cultural agitator, Massimo Indellicati, to compose soundtracks for a series of experimental short films – “Aquology – Oceano interiore” – centred around aquatic and science fiction themes. Intent on intervening with his own practice in electronics and synthesis, he asked field recordist, engineer, and software designer, Carlo Giordani, to come on board.

While the film project was never fully realized – only small fragments of Marutti and Giordani’s initial collaboration were used – their creative relationship bore fruit, bringing them together regularly over the subsequent years, each pushing and expanding the other’s approach toward sound into new territories. The album – the result of an enduring process of reworking of the cumulative material that resulted from their collaborations between December 2013 and January 2020 – melds these two distinct sensibilities into a single, palpable force.

“Impressioni organizzate di ansie liquide” rests at the sublime juncture of shifting materiality and perception; where the organic transforms into the otherworldly and the synthetic bubbles with life. The collision of two highly individualized creative practices – built from a vast pallet of sonority – across its breadth, the locations of source and the intervening hand shift in and out focus, gathering as an expanse ambience and event that gives the impression of being guided by chance occurrences and responses of its own making.

Amplifying the incidental into the mystical and metaphysical, this work challenges the very notions of how we locate the meaning of music and art. Unified by the thematic vision of water that first brought Marutti and Giordani together, the album culminates as a series of evolving, abstract images, alluding to the embryonic fluids that give way to life. Drifting long tones, buzzing electronics, and woven textures of ambiguous sound, rumble and dance between the foreground and distance, penetrated by punctuations drawn intermittently from Marutti’s synths and Giordani’s deft snapshots of the world.

Like its subject, “Impressioni organizzate di ansie liquide” is an immersive, languid realm, filled with elegant, poetic beauty, that bristle with unknown elements and the lingering potential of danger. A remarkably sensitive reminder of the creative potentialities that rest at the heart of electroacoustic, concrete, and field recording based musics, doubling as a vision of their possible futures, Marutti and Giordani have created an album that simultaneously drowns the ear and fortifies it with breaths of fresh air.

Andrea Marutti and Carlo Giordani met in 2005, at a time when Andrea was in the midst of his musical activities and firmly at the helm of Afe Records, and Carlo was fully busy building an impressively large library of sounds through his interest in field-recordings, and also taking part in the discussions and activities of various groups dedicated to the art of phonography on the web.

Mutually interested in each other’s work, they didn’t miss the chance to keep in touch, and began a dense series of exchanges, sharing ideas and recordings, but without trying their hands in a ‘real’ collaboration.

The first opportunity to work together on a project finally occurred in 2011, when Massimo Indellicati of Ambiente H invited them to provide a soundtrack to accompany a series of experimental movies that he was developing, whose main theme was “water”.

That was the input which, over the years, again to satisfy Massimo’s need for a soundtrack to his many projects – including the installation “Aquology – Oceano interiore” – led to the creation of a series of long pieces that were collected under the title “Impressioni organizzate di ansie liquide” (“Organized Impressions of Liquid Anxieties”).

In 2019 the five parts of this fruitful collaboration between Marutti and Giordani were given their final form and mastered. “Part I” was released in February 2020 on Belgian label Taâlem as one of the latest entries in their ever-expanding series of 3″ discs. “Part II” and “Part III” are now released as a CD on St.An.Da. for the first time. Agreements are currently being taken to release the shorter “Part IV” and “Part V” on vinyl in 2021.

On this release, the vast array of analogue / digital synthesizers and other electronic devices handled by Marutti is perfectly matched to Giordani’s field-recordings and tapes, giving life to a totally immersive environment in which the listener can only get lost, handing out moments of considerable tension, but also sudden flashes of light and calm mesmerizing passages.

Both the tracks on offer feature incredible recordings taken by Giordani during a five days expedition in the restricted areas of the dams of Venerocolo and Pantano dell’Avio Lakes in the Brescia district, Italy, which are effectively used in combination with sampled and electronic sounds to create an ‘augmented Musique Concrète’ that touches Dark ambient territories, often in slow motion but with sudden changes of scenery that abruptly turn the table, creating great suggestive effects.

“Impressioni organizzate di ansie liquide” is presented on a glass-mastered CD limited to 200 copies which is housed in a deluxe six panel digipack with black finish, and features pictures by Stefano Gentile.

In 2005 I had the chance to know Carlo Giordani’s work through Paolo Ippoliti – of Logoplasm fame – who had hosted a large collection of his field-recordings on the S’agita Recordings website. At a time when the field-recordings craze was beginning to spread, I immediately realized that Carlo was a veteran in this… field! A grown man with a very peculiar listening talent and technical ability, as well as a special sensitivity.

The first part of this body of work, entitled “Furia e abbandono (galleggiare, annaspare, arrendersi e lasciarsi trasportare)” – which translates into “Fury and Abandonment (floating, struggling, surrendering and being carried away)”, was released by Taâlem in February 2020. Originally exceeding 30 minutes, it was completely revised to suit the 3″ MiniCDr format.

Following the release on Taâlem, I approached Stefano Gentile – founder of the memorable Amplexus and now head of the well known Silentes and 13 labels, among others – and he was kind enough to offer us a slot on St.An.Da., one of his many creatures.

Despite the hard times that we all had to live in the recent months and the many restrictions that such an awful new reality has brought in, it only took a few weeks to finalize this release. Stefano was particularly supportive of this project, and the artwork is graced by pictures that he took on purpose, while listening to the music on headphones during a solitary excursion on a late winter day.

As also mentioned in the press release, both tracks include exceptional field-recordings made by Carlo during an expedition he took in July 2011 at the dams of Venerocolo and Pantano dell’Avio Lakes in the Brescia district, Northern Italy. Both dams are located in restricted areas and permission had to be granted to visit them. As you easily guess, this is not your everyday/average stuff, but a precious audio-documentation of two very particular places usually accessible only to the personnel who keep them running.

Other field-recordings which are part of these compositions were taken in a metalworking factory and they include a giant electric oven, a 6000-ton press, machineries that move wreckage to melt it down… You get the picture.

Treatments to the original recordings were done by Carlo and me, using INA-GRM plug-ins and other software. My contributions were created mainly with hardware analogue and digital synthesizers: Korg MS-20, Waldorf Microwave XT and my favourite, the mighty Roland JD-800. I also sampled and re-played some of the field-recordings taken by Carlo, and added other audio samples from my personal library.

We believe that we were successful at ‘melting’ our different sound worlds and attitudes, me and my synthesizers and Carlo and his field-recordings. We are fond that the various elements sustain each other and that the tracks have a strong narrative and evocative potential.

Vital Weekly 1234, Frans de Waard, May 2020
You might think that the disc by Marutti and Giordani is a re-issue, as you saw the title already reviewed in Vital Weekly 1223. But I wrote, “that this piece is the first part of a bigger work to be released in the future”; this is the bigger work. Well, or part of it at least, as these are part two and three of the work and all of this is (again) part of a multimedia project by Massimo Indellicati, called ‘Aquology – Oceano Interiore’, and you don’t need to be a linguistic expert to realize this is all about life below the waves. Whereas the first was twenty-two minutes, these pieces span thirty and forty-five minutes. While splashes of water are part of this as well (as before), in “Parte II – Ansia e Sollievo’ (‘Anxiety and Relief’), there are also birds, church bells and street sounds. For some reason it is not all about the sea then, isn’t it? Maybe the multimedia project could tell us more about it, but that’s the part we are missing here. Marutti is the man responsible for synthesizers, samples, treatments, mixing and mastering, whereas Giordani handles the field recordings, tapes, treatments and mixing. All of this sees the music continuing where we left the first part; mucho drones are laid out, solemnly and peacefully meandering away, or slow (oceanic?) drift, while on top of that the field recordings come and go; it almost sounds like a stream of conscious sounds, or maybe like mixing blind from a bunch of unlabelled sources and see what happens. This is a seventy-four-minute release that could have been a three-hour piece as well. It moves back and forth between louder and quieter sections, never becoming a true noise anthem or a total ambient path. It has some fine urgency and is a true, dark beauty.